> mcfbnews > Breakfast With County Board-Mayors-State Legislators
Our Mission Statement:
"Provide our members with information to increase profitability, quality of life, and to serve as an advocate on agricultural issues." 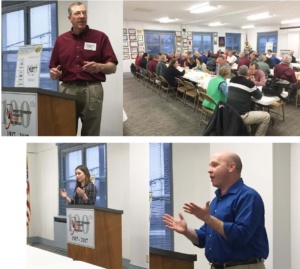 The Montgomery County Farm Bureau of Directors hosted members of the Montgomery County Board, county officials, mayors and village presidents from throughout the county and state legislators to a breakfast at 7:00 a.m. Tuesday, March 14, before the monthly county board meeting.