> mcfbnews > “Farm Bureau Recaps Year At Annual Meeting” – By The Journal-News
Our Mission Statement:
"Provide our members with information to increase profitability, quality of life, and to serve as an advocate on agricultural issues."

Thank you to Mike Plunkett with The Journal-News for attending our meeting and writing this nice article! 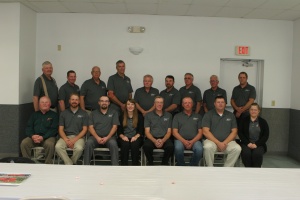 “Members of the Montgomery County Farm Bureau celebrated a successful year at their 101st annual meeting, Thursday, Nov. 8, at the Knights of Columbus Hall in Taylor Springs.

In his remarks, Jay Niemann, who has served as president of the board of directors since 2013, introduced fellow directors and asked veterans in the crowd to stand and be recognized.

He introduced Secretary Justin German who read the minutes from last year’s meeting, and Treasurer Heath Houck who reported a net worth of $1.1 million for the Montgomery County Farm Bureau.

Jean Anderson, president of the Women’s Committee, reported on activities for the past year, including the annual soup luncheon.

Matt Belusko reported that the Young Leaders organization has grown to nearly 20 members, most of whom are present at every meeting.

Gary Meyers, president of M and M Service Company, reported on a successful year that will provide healthy returns for member owners.